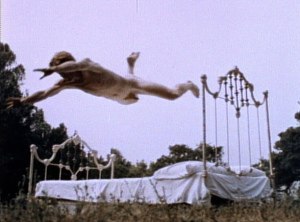 When James Broughton was 30, he frequently contemplated suicide. Then James began making films and thoughts of his own extinction disappeared for good. That was the 1940’s and cinema was still a young medium.

In his book on filmmaking, Seeing the Light (1977), Broughton wrote,

“Cinema like life is only worth living if it is in the service of something beyond the explicit and the mundane. Keep true to your own nature and you will be original enough. Trust your feelings, intuitions, attitudes, and follies. Go deep. Don’t wrestle with a mouse. Exercise an angelic foe or a challenging daemon. Follow your own weird.”James Broughton

Visual and verbal poetry reign in Broughton’s films.  Broughton’s 1967 award-winning film, “The Bed”, ran for over a year in a San Francisco theater.  It chronicles an amazing range of fantasies and realities that can happen on a bed. “I never expected this success.” he said. “I made it for my amusement. It was the only one of my films that ever made money.”

Broughton’s films have screened in retrospectives at the Museum of Modern Art in New York, the National Film Theatre in London, Pacific Cinematheque Vancouver, the Royal Film Museum Brussels, and many others.

Honored with a lifetime achievement award by the American Film Institute, the groundbreaking tactics of his films remain inspiring today.

Enjoy a taste of James’ films below!
A large number of Broughton films are available
from the Facets Collection “The Films of James Broughton”