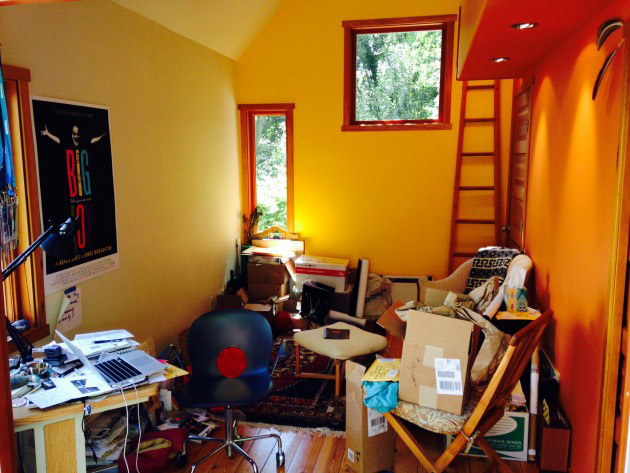 A movie is sexy.

Making a movie is not.

I know.  I’m the Associate Producer of BIG JOY: THE ADVENTURES OF JAMES BROUGHTON.  It sounds like such a fancy title, and it is, but let me break it down for you in a few words:  Associate Producer really means – paper shuffler.  Over the course of the last five years with BIG JOY I’ve shuffled papers, written on them, keep track of where they are going and why.  Also, I’ve nagged the other people who have a responsibility to these papers.  As BIG JOY Co-director Eric Slade once put it, “Aimée is our associate producer… She sends me loads of emails with lists of things I need to do in them.” 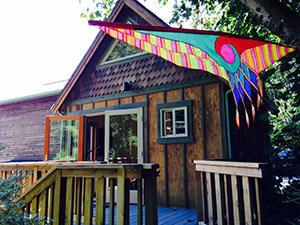 When I started working on this project, Producer Stephen Silha and I sat in a little cabin we call “The Forge” brainstorming and writing grant proposals and letters asking everyone we knew and didn’t know for money.

Actually, that’s the case for a lot of filmmakers.  Ours may have been a little different because we started all our sessions by reading a poem.  We were also graced with gourmet lunches served up by Stephen’s partner Gordon Barnett.  Still, we spent a lot of less than romantic hours addressing envelopes, creating databases, asking for money, and figuring out how we were going to keep track of this growing creative beast.

Fast forward to about a year ago.  I can still remember the look on my girlfriend’s face when she came out of the theater after seeing BIG JOY for the first time.  She was there that night because she was my friend—not because she knew or cared about who James Broughton was.  As the theatre door swished behind her she looked at me and gushed with a happy sigh, “That was soooo inspiring!” 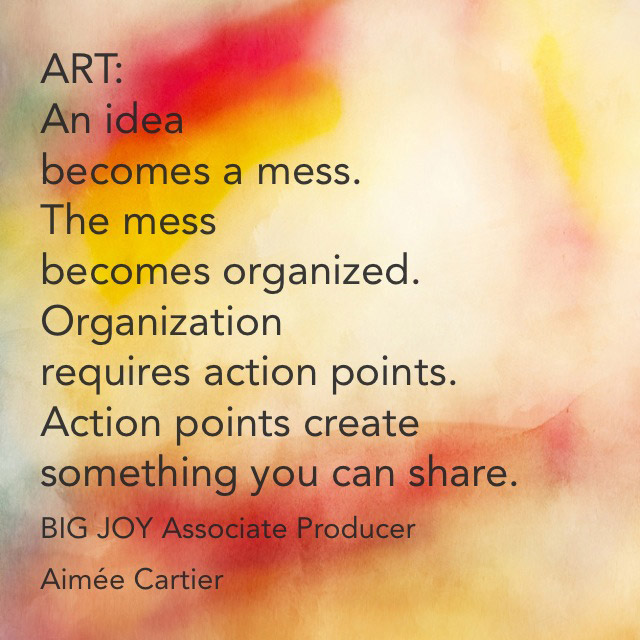 Now, with over a year of successful world-wide film festivals under our belt and then last month the release of our movie on DVD and web streaming, I’ve heard that sentiment –“wow!” – countless times from people all over the world. All of us at BIG JOY have. And it always makes me proud.

Not once in all those years of sitting on the floor knee deep in papers, searching for sources of funding, and writing our story over and over for anyone who would listen, did I ever consider what it would feel like when the film was finished.  Maybe that was an oversight on my part.  Still, it’s amazing to see someone walk out of the theater glowing, changed for the better, after seeing something you were a part of, after seeing James’ story. 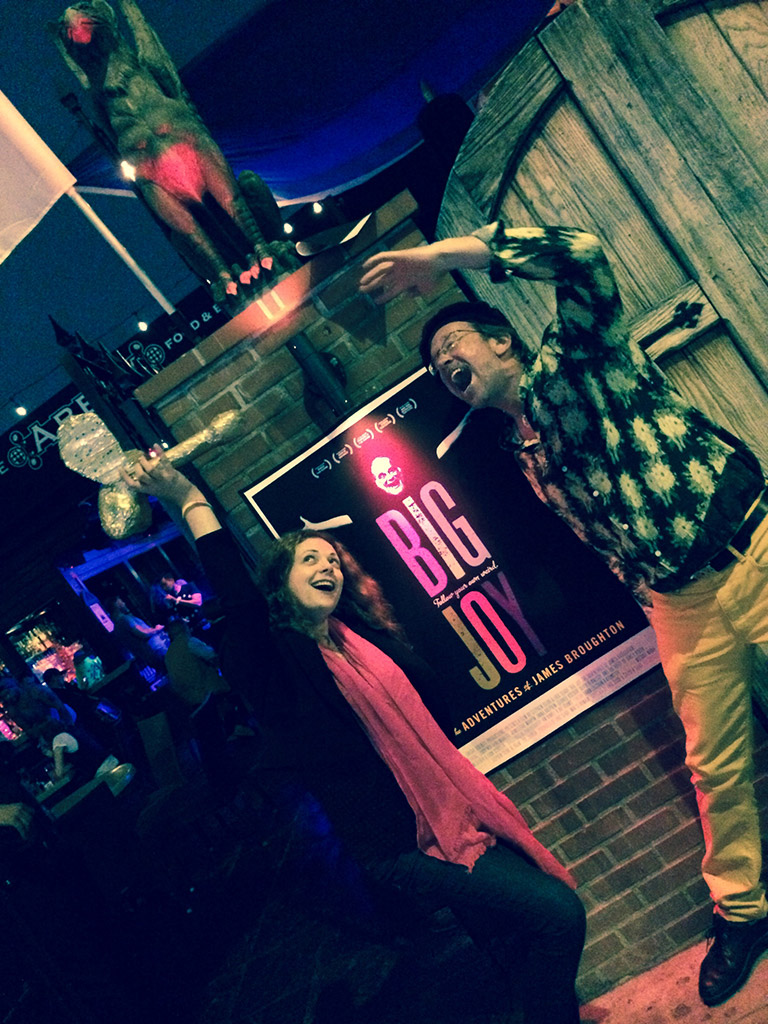 The pieces of our process to get there are not unusual.  Filmmaking is a messy process.  We know several filmmakers right now who are in the thick of it.  Standing on that precipice of overwhelm— daunted by the necessary tasks still ahead of them in order to make their film a success, pulling their hair out deciding which scene needs to be cut. Actually it’s true for a lot of art.  Before it all comes together there is an idea, followed by a mess, then an organization of that mess.  Next, the less than pretty or fun action points to power through before you can share your creation.

So, if you are in the thick of it right now, we want to send you a message:  Take heart.  Stick it out.  We know you.  We hear you.  You are not alone.  Every filmmaker and every artist has been through it—or is in it right now.  It’s part of the creation process.  Though it may take one paper shuffle, one phone call, one scene cut at a time, if you persevere you will succeed in creating something new—something only you could do. 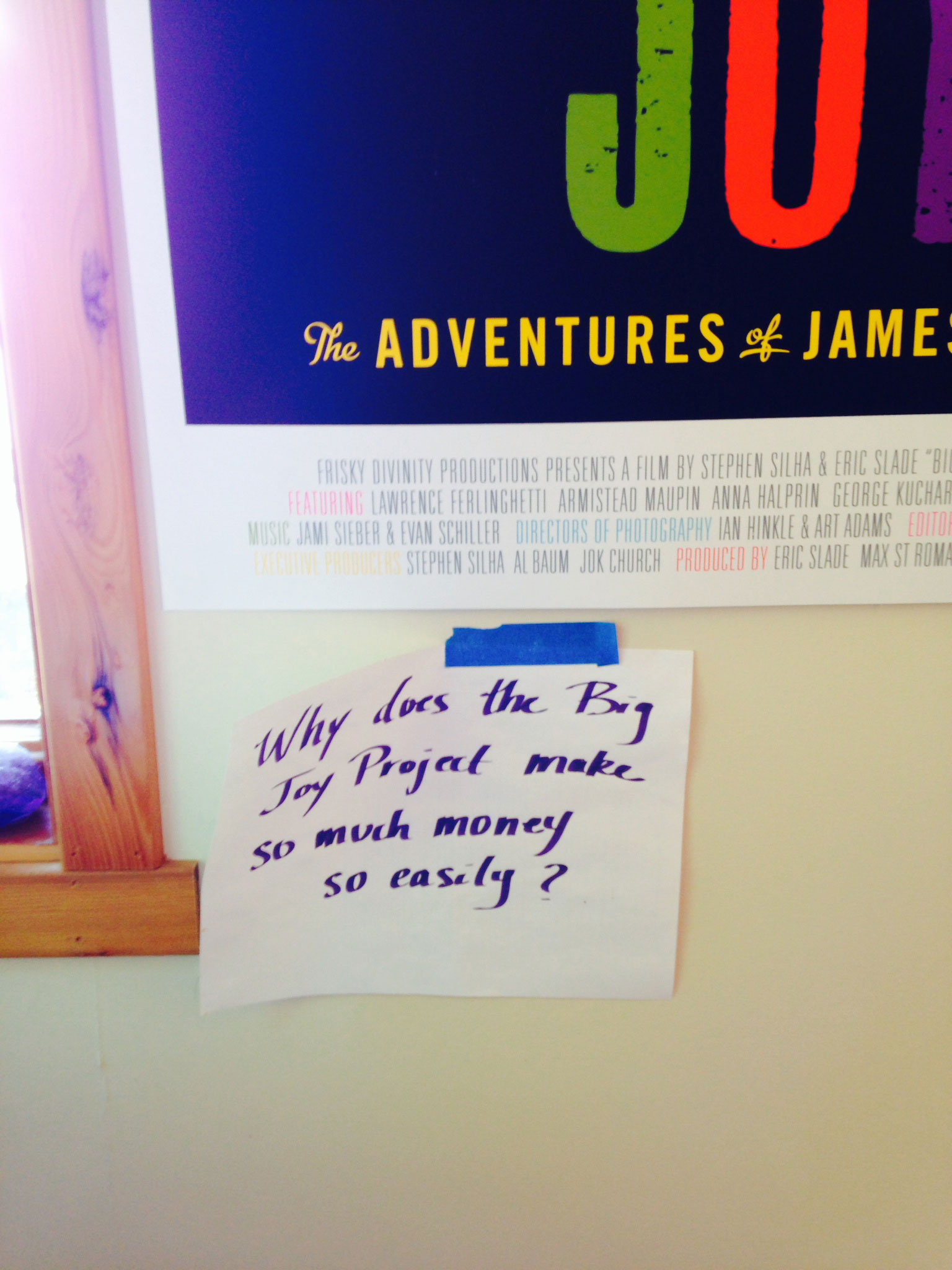 One of our techniques: asking ourselves positive questions!

“Adventure not predicament” my friends, as our beloved James would say.  And if that doesn’t work, breathe deep, take a walk, then try one task at a time. 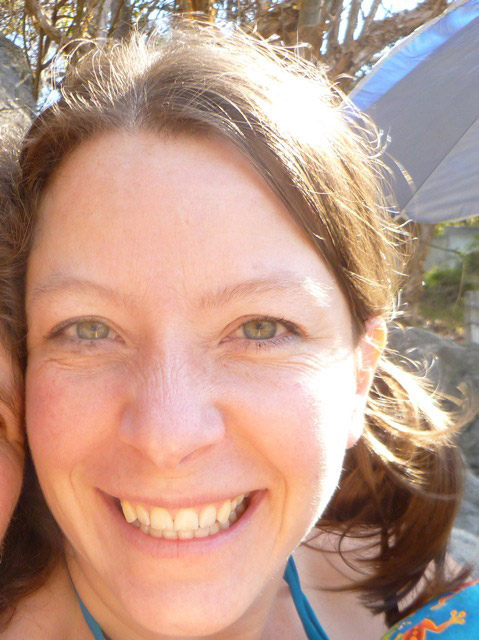